October Pet of the Month: Taco 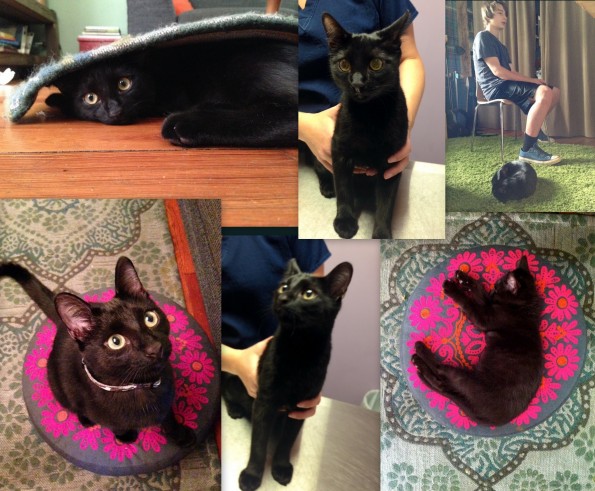 Just in time for Halloween, it’s a black cat named Taco. Here is his amazing (but scary) story, told by his owner Alice:

I found a little black kitten in a cold rain in March in the Northeast Plaza parking lot on Buford Highway. Small enough to fit in a coffee cup, he was soaking wet and yowling. Cars zoomed all around. I scooped him up and took him home. My son wrapped him in a towel. We said he looked like a burrito. We thought maybe we should call him Burrito. Taco had a better ring to it so Taco he became.

Taco was fearless and affectionate. He immediately became friends with our formerly friendless cat, Coley. He loved people and played nonstop, very active and sweet. Of course he became much loved in our household. In July it was time to visit the vet. I took Taco to East Atlanta Animal Clinic for shots and neutering. While there I was asked if we wanted to have him microchipped. I said sure, although I couldn’t imagine losing him. I only let him out while I was there to keep an eye on him. He always came running when I whistled as I had trained him to come to this whistle by rewarding him with a spoonful of canned food. Taco loved his food and galloped full speed toward that whistle without hesitation. He weighed 5 lbs.

Taco had been at home with his microchip for three days. It was dusk and I was packing for a trip to France. I was going back and forth to my shop in the backyard. Taco was following me. As I walked I heard a loud raspy hissing sound in the tree above me. I thought maybe it was a possum. I walked to the house with Taco behind me. I went inside to put something in my room and came back out. Taco was gone. I called, whistled, called. I got a flashlight and scoured the neighbors’ yards. I walked all over, calling, asking people, whistling. I was starting to feel my heart in my throat. How could he have vanished? To ease my fears I went online (never a good idea) to reassure myself that no bird of prey would eat a cat. To my horror I read that Barred Owls do eat small cats, that they hunt at dusk, and that they make a raspy hissing sound when excited. Right then I was sure that my little black cat had been hunted by an owl. It felt like a nightmare.

I was devastated and spent a sleepless night imagining what happened. I left on an international flight the next morning terribly sad and full of dread about telling my 13 yr old son that his kitten was gone. My housesitter was keeping an eye out in case a miracle happened but I was sure none would. I came back to Atlanta ten days later to a sad, quiet house with only one cat. A week later I was walking back to my car after a school meeting and saw a missed call on my phone. I returned the call. It was Dearborn Animal Hospital in Decatur. They said they had a black kitten whose microchip said it was Taco. I almost fell on my face. I could not have been more shocked. Still reeling, I drove to Decatur as fast as I could. It was Taco. I felt like I was dreaming and for once it was a great dream.

The story I got was that a nice lady found Taco in her neighborhood “looking sad”. Her neighborhood is 2 ½ miles away. She took him in and, realizing what a great personality he had, decided to keep him. She took him to Dearborn to get a rescue check up. Seeing that we was neutered the vet scanned him for a microchip. I would have never seen Taco again had he not had that microchip. I will never know if an owl had anything to do with his disappearance but I do know that somehow our little kitten traveled two miles and crossed Moreland Ave. It’s been great having him back… hearing the thumping sounds of cat wrestling, and seeing him cuddled up with his boy. Microchips are a great invention. I certainly advise anyone with a beloved pet to get one. We have living proof of how well they work. Happy Halloween from Taco, the luckiest black cat in the world.