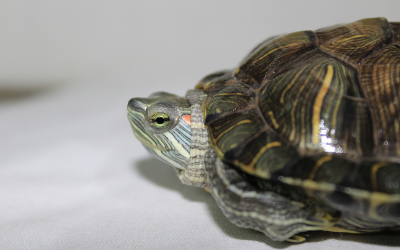 Aquatic turtles, such as the red-eared slider, have several unique problems. Understanding these problems will allow you to better care for your pet and minimize future health care issues.

Commonly called bladder stones, cystic calculi occur when minerals from the diet form crystals in the urine, which then stick together and form stones. This usually results from improper nutrition and/or dehydration.

When a turtle has cystic calculi, there may be blood in its droppings. Your veterinarian will perform a physical examination, palpate the turtle’s abdomen, and take radiographs (X-rays) to diagnose the problem. Removal of the stones generally requires surgery plus fluid therapy to prevent kidney damage. Your veterinarian will discuss dietary and environmental modifications to try to prevent stones from reforming.

The protective shell of a turtle makes surgery difficult. Two techniques are available for performing surgery on organs contained within the shell. One technique involves cutting the shell and then repairing it following the procedure; the second technique involves making an incision in front of and through the muscles of the pelvis and hind limbs to enter the abdominal cavity. Both require the experience of a knowledgeable reptile veterinarian.

In turtles, a prolapse occurs when an organ (such as the intestine, cloaca, urinary bladder, uterus, or penis) protrudes from the vent (the opening in the underside of the tail from which the turtle passes droppings). In male turtles, the penis (which is a surprisingly large, black organ with a spade-shaped end) may periodically prolapse out of the vent and become visible outside the body when the turtle is stressed or acting sexual, but then it should revert back into the shell easily. This is not a problem as long as the penis can go back in. If the penis stays out, it can become traumatized and swollen or can be bitten by another turtle, preventing it from reverting back into the shell and ultimately causing a serious problem.

"Any prolapsed tissue represents a potentially life-threatening problem and should be seen by a veterinarian immediately."

Similarly, a turtle with gastrointestinal parasites and diarrhea may strain to defecate and prolapse part of the large intestine or the cloaca (the common chamber into which the gastrointestinal, reproductive, and urinary tracts empty) out of the vent. This is not a normal occurrence and should be addressed by a veterinarian immediately.

Regardless of the tissue or organ prolapsed, all can become traumatized, become dried out, or suffer from compromised blood flow. Any prolapsed tissue may be viewed by other animals in the same tank as something to eat, and they will readily bite at the exposed tissue. Any prolapsed tissue represents a potentially life-threatening problem that should be seen by a veterinarian immediately.

If you notice that your turtle's shell is growing irregularly, it may be a sign of malnutrition or even metabolic bone disease. By the time you notice this, the underlying problem likely has been going on for quite a while and may have serious long-term effects on the turtle's health. The shell may be soft, bumpy, or asymmetrical. The problem may be due to an inappropriate diet that may be too high in protein and fat or may be imbalanced in vitamins and minerals. The turtle also may not be getting appropriate ultraviolet light. Any turtle whose shell is abnormal should be checked by a veterinarian so that appropriate treatment, as well as correction of environmental factors, can be initiated.

A red-eared slider's shell is remarkably strong, but it can be injured. Wild turtles are commonly found on the side of the road after getting hit by cars and suffering from serious shell fractures.

"Although shell fractures can be serious, the shell is bone and can be repaired."

Pet turtles may accidentally be dropped or may fall off tables if they escape from their aquariums or are left unattended. Family pets, such as dogs and cats, may chew on a helpless turtle, causing severe damage to the shell (or legs and head). Although shell fractures can be serious, the shell is bone and often can be repaired. Any trauma to the shell should be brought to the attention of a veterinarian immediately.

Algae on the shell

Green algae growing on the outside of the shell occurs commonly and can be cleaned off with periodic brushing of the shell with disinfectant cleaners. It may be a reflection of a dirty tank and infrequent water changes. Use a filter to keep the tank clean and be sure to change the filter regularly. Excessive algal growth on the shell that penetrates the shell surface may require medical attention from a veterinarian.

The skin of turtles periodically (and normally) sheds off in pieces. In the water, shed skin appears as a whitish, "fuzzy" substance coming off the skin that is sometimes mistaken for fungus or other disease. Full thickness shedding of skin, leaving raw or bleeding areas, is clearly abnormal and may be a sign of a bacterial or fungal infection, hypovitaminosis A (vitamin A deficiency), burn, or trauma.

The scutes (plates) of the shell normally flake off as the turtle grows. Check the shell closely for any signs of abnormalities suggesting disease. If you are not sure whether the shell is normal, check with your veterinarian.

Turtles are commonly incriminated as a cause of Salmonella bacterial infection in children. Salmonellosis is a zoonotic disease, meaning it can be transmitted from animals to humans. Infected animals and people carry the bacteria in their gastrointestinal tracts and shed the bacteria in their feces, serving as a source of infection to others. In susceptible people and animals, salmonellosis can cause severe gastrointestinal disease, with symptoms such as nausea, vomiting, diarrhea, abdominal pain, cramping, fever, or septicemia (blood infection). Young children, the elderly, and the immunocompromised are most at risk for developing severe disease. Although turtles are certainly not the only reptiles that can carry Salmonella, most turtles carry the infection asymptomatically, in that they do not show signs of illness.

"Salmonellosis is a zoonotic disease, meaning it can be transmitted from animals to humans."

During the mid-1970s, some young children contracted Salmonella from their pet turtles. Many of these children did not exercise proper hygiene (such as washing their hands after handling the turtles and even placing the turtles in their mouths). Legislation was then passed in the United States making it illegal to sell turtles with a shell length smaller than 4 inches (10 cm) to try to prevent children from putting small turtles into their mouths. Before purchasing a turtle, check the laws in your municipality regarding legal ownership of pet turtles.

Prevention, through proper hygiene, is the best way to prevent salmonellosis. Properly clean and disinfect the turtle’s tank every time it is soiled. Clean up all feces right away. Have a dedicated area for cleaning reptiles’ items, separate from the area humans’ items are cleaned. Most importantly, wash your hands thoroughly with disinfectant soap every time after handling, feeding your reptile, or cleaning its cage items to help minimize risks of contracting salmonellosis. Since most turtles that carry Salmonella are not ill, they usually require no treatment.

If given the opportunity, most wild red-eared sliders will attempt to hibernate, depending on the subspecies and its native locale. During hibernation, they will stop eating and slow their movements; their metabolism also slows, and their immune system function becomes suppressed. In captivity, if the photoperiod (daytime length) is kept at 12-14 hours and the environmental conditions stay warm, then turtles typically do not hibernate. While controversial, most veterinarians feel it is best to try to prevent captive red-eared sliders from hibernating, since hibernation is very stressful on the body, and sub-clinical illnesses can manifest themselves during the immunocompromise that accompanies hibernation. 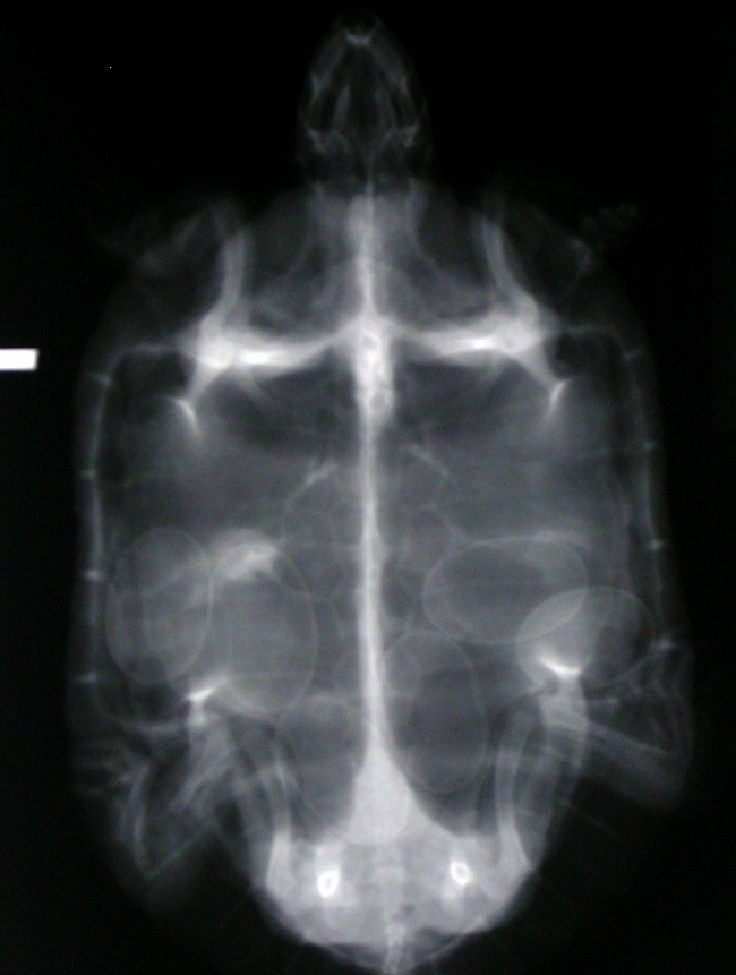 Dystocia, or egg binding, occurs when the female turtle is unable to pass her eggs. It is a common problem in reptiles and can be life-threatening. It is caused by a variety of factors. Most commonly, it is associated with poor husbandry, including improper environmental temperature or light cycles, inadequate nest sites, and/or improper diet (malnutrition). Other contributing factors include the age and physical condition of the animal, injury to or physical obstruction of the reproductive tract from deformed or oversized eggs, physical abnormalities within the reproductive tract or pelvis, infections, constipation, abscesses, or other masses. A healthy, gravid (with eggs) turtle may not eat, but will still be bright, active, and alert. A gravid turtle with dystocia typically does not eat and rapidly becomes sick, lethargic, or unresponsive.

A veterinarian familiar with reptiles should examine an turtle with these signs immediately. A veterinarian uses a physical examination, blood tests, and radiographs (X-rays) to help diagnose the cause of the dystocia and to determine whether medical and/or surgical procedures are best indicated in treating these animals.

© Copyright 2020 LifeLearn Inc. Used and/or modified with permission under license.

View All
Need to see our vets? Schedule an appointment Book Now