Meet Zack, Kismet & Brodie, three lovely kitties who are being featured just in time for Adopt-a-Cat Month! Read what each of these three handsome boys has to say: 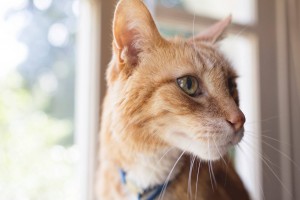 “Hello, I am an orange tabby named Zack Rabbit Dixon. I am now 20 years old and have been cared for by my servant, Brad, since he found me as a kitten in a parking deck in 1995. Needless to say, good help is hard to find. But I credit some of my longevity to lots of Reiki from my human and acupuncture from Dr. Ringstrom. In 2004, my human somehow got the ludicrous idea that I’d like some feline companionship. But through my Jedi powers of mind control over the human, I’ve managed to stay in power, despite persistent challenges to my authority. I’m also known as ‘Pushy Pants,’ and I will not be denied a meal under any circumstances. It’s good to be the King.” 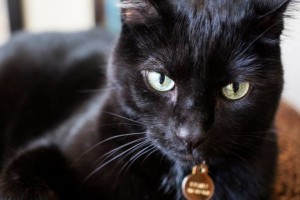 “Hello, I’m a black panther named Kismet, and I’m known for my star quality. I’m soft as velvet and enjoy being admired and petted by everyone I encounter. I have an insatiable appetite for love, affection, and the limelight. I could have been in motion pictures! Now 11 years old, I’m working on my memoirs, now that Facebook rules about ‘reality’ have cramped my style as a social-media sensation. Some of my earliest memories involve being found under my human’s car and soon earning my nickname ‘Sassy Pants.’ My deep, sensual Barry White purr has to be heard to be believed.  I work part-time as a masseuse, offering ‘Ancient Egyptian Feline Massage,’ a combination of deep-tissue biscuit-making and acupuncture.” 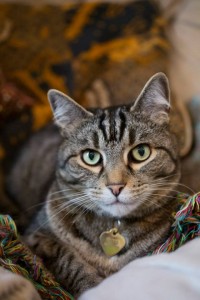 “Hello, I’m a grayish tabby named Brodie. I’m certain that in some parallel universe, I live in a house where I run the show. But mark my words, the day will come when ‘Punky Pants’ rules the roost. I used to be an acrobat, drawing upon what must certainly be squirrel-monkey ancestry, performing double backflips and climbing door frames. But now 10 years old, I like to channel my energy into hiding from my human in the least likely locations possible. I am usually rewarded for this behavior with frantic cries of ‘Treats!’ I love my human, but he may not be the sharpest. It took him years to figure out that when I thoroughly lick his fingers and hands, what I really want is help with my grooming.”